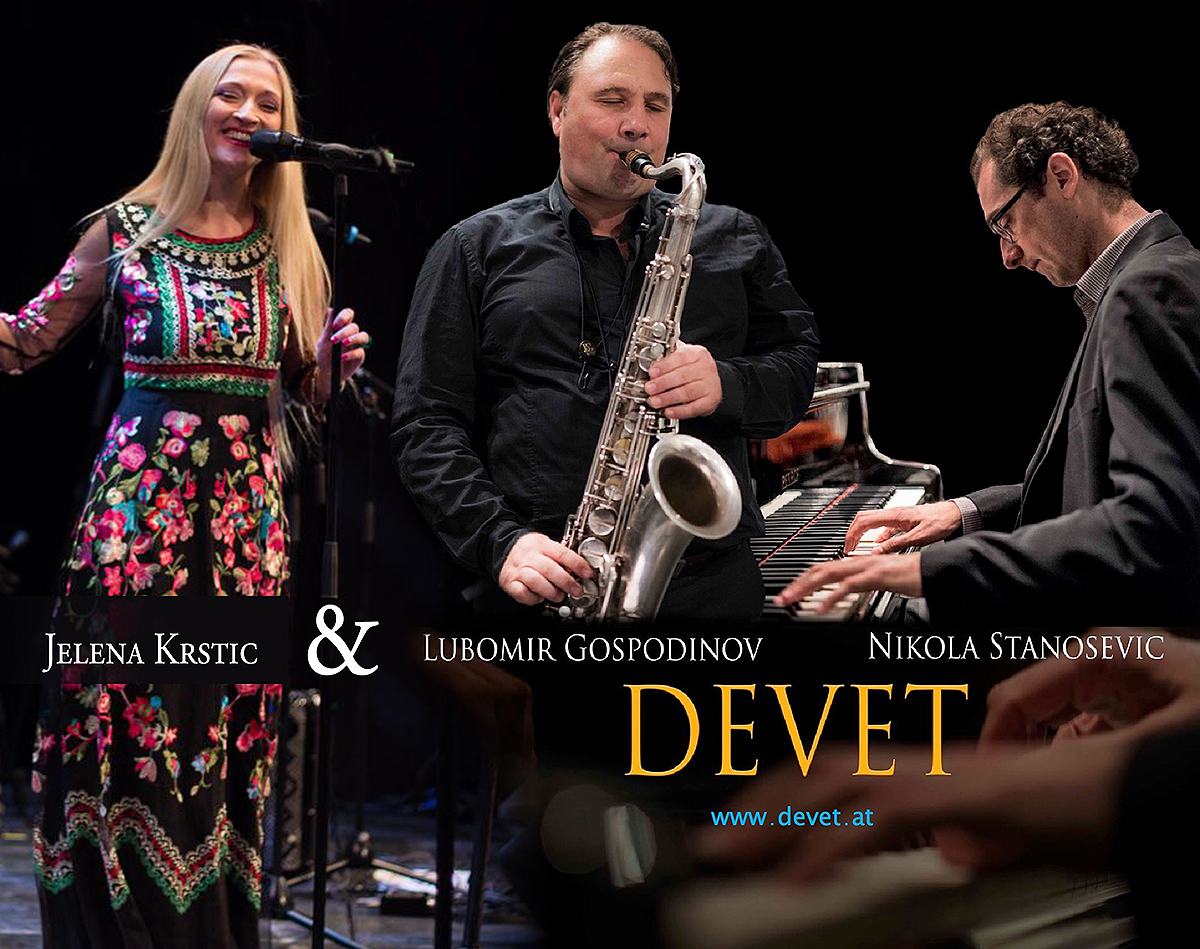 DEVET feat. Jelena Krstić is the name of a formation of two musicians from Southeast Europe - saxophonist and clarinetist Lubomir Gospodinov (Bulgaria) and pianist Nikola Stanosevic (Serbia). The unique style of DEVET project is built on motifs from different countries, woven into skillful jazz playing. Thus the musicians  create an unique atmosphere filled with the energy of virtuoso saxophone and the rhythm of lyrical piano. In the multi-layered compositions of Lyubomir Gospodinov and Nikola Stanošević, the delicate melodies are skillfully changed with filigree, colorful rhythms. The essence of their music is a delicate dosing of folklore elements with modern, freely used jazz style  technics.

DEVET gifts us a high-quality and successful mix of technical skills and playful dance melodies. The two musicians of DEVET not only experiment in their compositions with 9/8 - this complex, asymmetrical, strange measure, typical for Bulgarian folklore, but also move freely and masterfully in other difficult unequal rhythms. These rhythms make DEVET to sound versatilely and  always to stay authentic and organic. This certainly has something to do with the composing way derived from the living experience - sometimes it happens intuitively and for this -  naturally and even magically sometimes. DEVET is a musical journey into memories and  into dreams full of harmonies. DEVET surprises with many exciting twists and waves of emotions: slight melancholy, poetic longing, or heartfelt optimism sometimes. DEVET are simple and complex at the same time, brilliant but easy to understand by everyone. In all experiments and innovations,  traditions and memories are preserved and sound familiar even to non-Balkan audiences. The roots are always noticeable, almost visible.

Lyubomir Gospodinov is well known in the Bulgarian jazz circles. A graduate of the Lyubomir Pipkov Secondary Music School and the Prof. P. Vladigerov National Music Academy, he continued his education in Austria where entered  into the field of jazz. He performs series of concerts in North and South America, Europe and Asia with famous musicians likeTeodosii Spasov, Erol Rakipov and Martin Lyubenov, as well as with Tony Lakatos, Martin Fuss, Jorge Pardo and Harri Stojka.

Jelena Krstić is a very talented musician and talented singer, born in the small Serbian town of Kovin. Her love of music began at the age of four, when she joined her parents in singing and playing the piano, inspired by their devotion. Her dream is to perform on big stages and to share her musical talent with others. She pursued this passion, attended the Belgrade Conservatory of Music and studied music in Graz and Vienna, Austria.

Jelena won the Austrian singing competition in the TV show known as THE VOICE. She recorded her first record "Ljubav" ("Love"), which includes Balkan and Roma music, while continuing to work as a vocal pedagogue and music teacher in Vienna. At the same time, she maintains an independent music career, presenting his performances around the world.

From 2016 to 2019, Jelena is a member of Jose Feliciano's band as a singer and music director. During this time she sang around the world and shared the stage with world-famous musicians such as Sting, Gregory Porter, Gloria Estefan and others.

The apotheosis of this collaboration is Jelena's second solo album, Toda la Vida, recorded with Jose Feliciano as a special guest of the album and produced in Los Angeles.